I’m playing in Kathy‘s 30 day color challenge which is only 11 days this time.

I have chosen to use some art impressions stamps, the large bunnies, flower pot, birds, cart and vines on the left side of the cart.

The baby bunnies on the right are impression obsession but I thought they would fit in really well with this scene.

I also pulled miscellaneous flowers and plants from other stamps sets and the grass is from a Stampendous set. I like to pull things together to create my own little scenes as I enjoy creating this type of card the most.

I have used watercolor pencils to color in all of these images and I did stamp the flowers and the greenery that are in the flower cart and in the flower pot with Crayola washable kids markers. The rubber stamps take this type of coloring and stamping really well.

Then I take my Crayola washable kid’s markers and I scribble them down onto a slick surface where I can pick them up with my Pentel Water brush and distribute the colors wherever I want them.

Thanks for stopping by. I hope that you are all are finding time to color and enjoy Kathy Racoosin’s 30 day color challenge! I especially love that it is just coloring some thing.

Hey Crafters!!  Last minute stocking stuffers for all of my favorite peeps made from Legal Note Pads!  I love to make these and personalize them for the recipients. 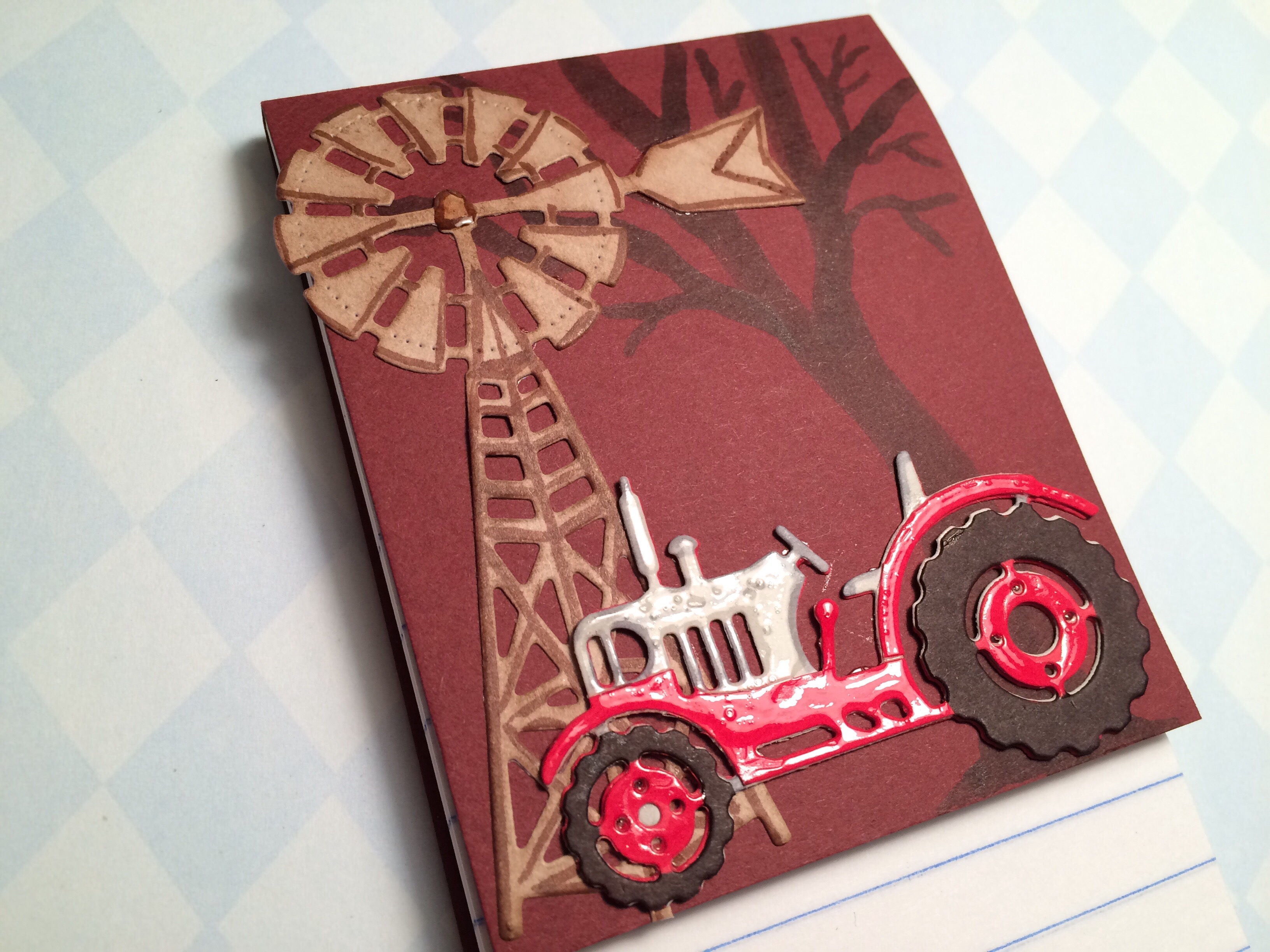 My dad has a tractor just like this!  A cottage cutz tractor die cut in red and gray card stock and pieced back together the tires were colored with a Bic markit black marker and glossy accents added to parts of the tractor and the wheels. 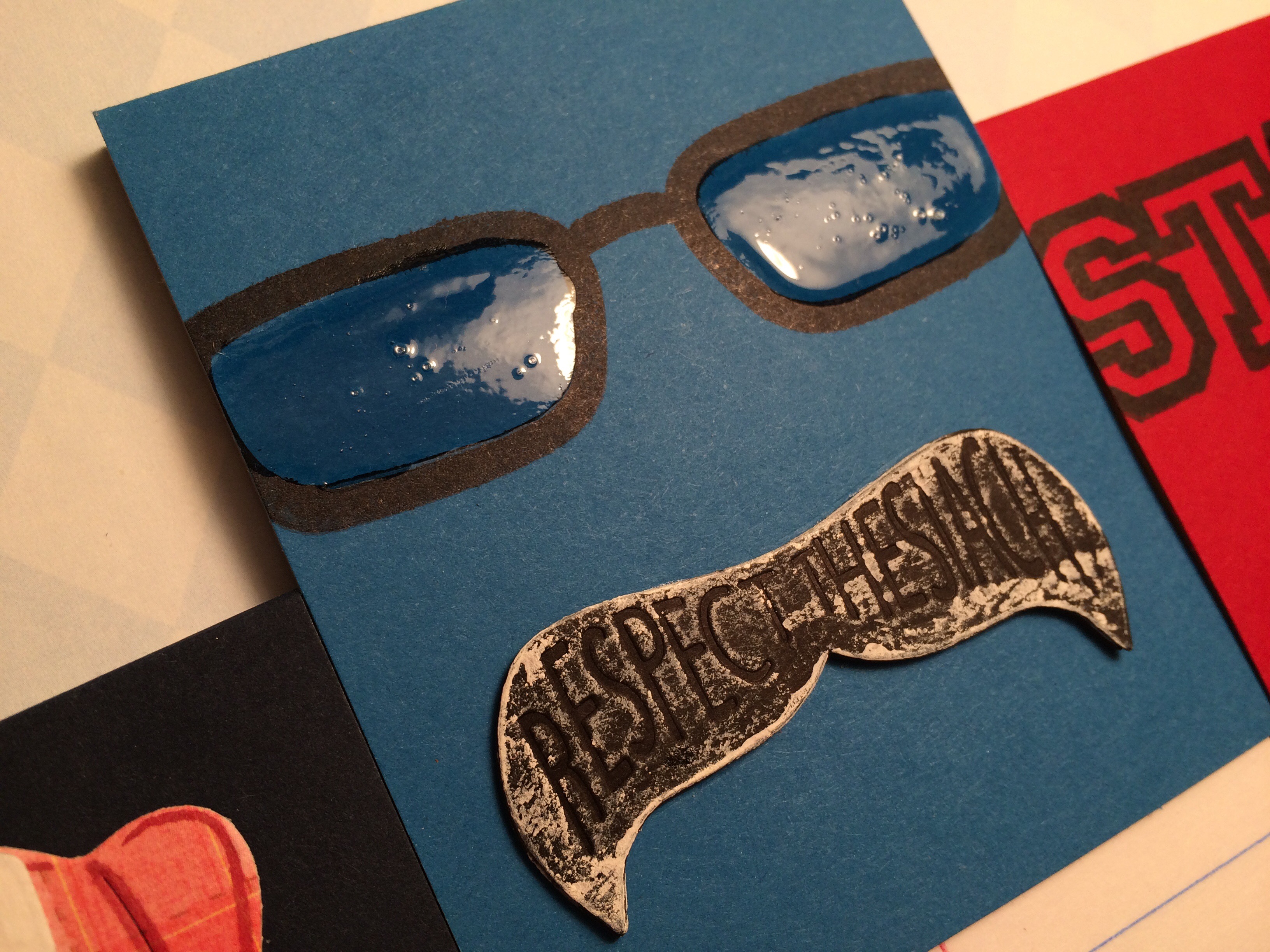 My brother has a stash and glasses! LOL. This one didn’t turn out too great but I always do a hunting or tool thing for him and I wanted to do something different this year!  A little bit of white acrylic paint was smeared over the mustache to reveal the words on this momenta die set.  “respect the stash” The glasses are from a stampabilities clear stamp set. 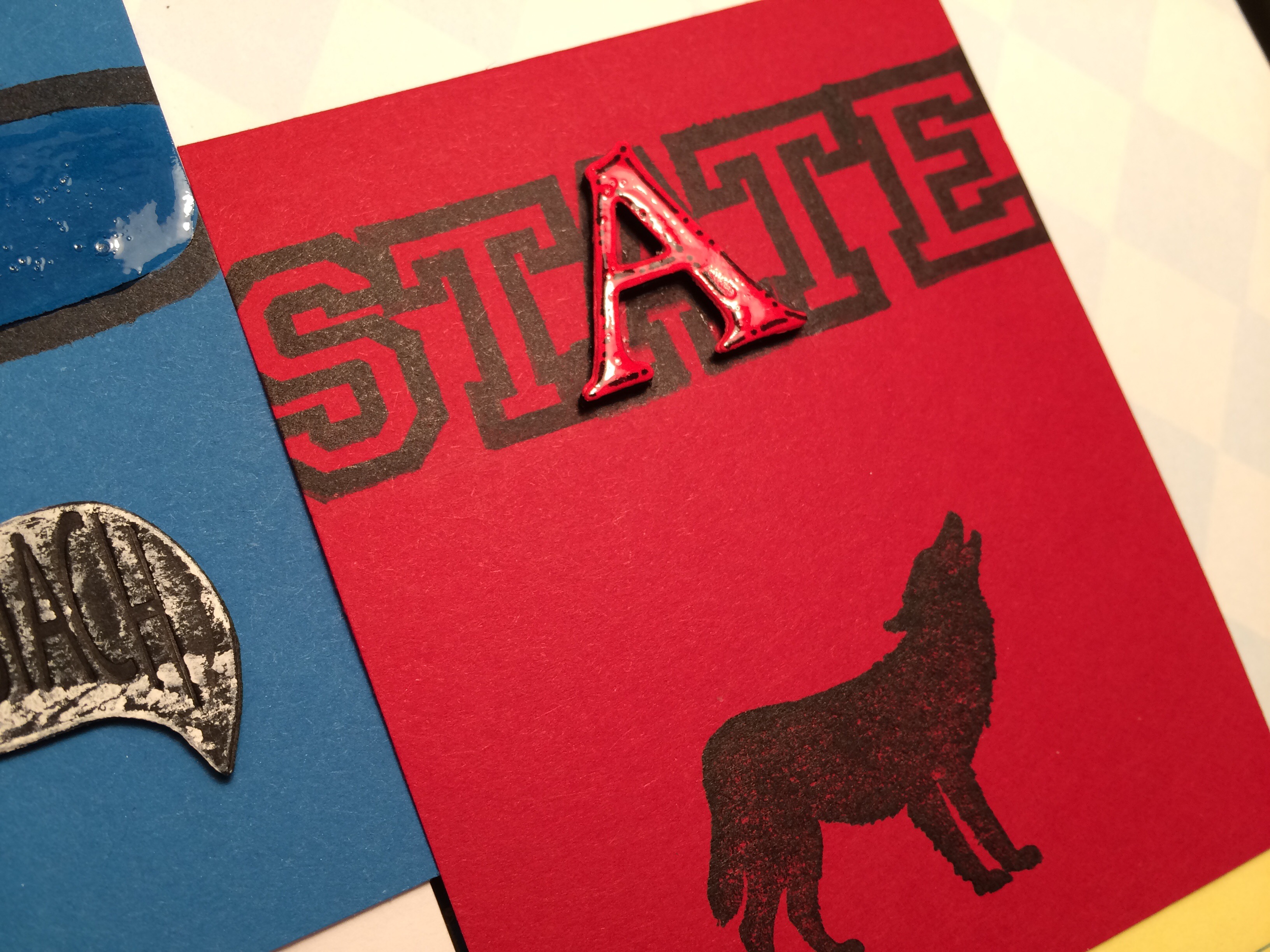 My nephew goes to a college that has changed its mascot?  What!  It kind of blew my mind and mojo.  They’ve been Indians as long as I’ve known.  We have a little Indian blood, if we sat around crying offended minority we wouldn’t have anything.  Just sayin’. Recollections varsity Alpha stamp set and spellbinders font one A. The wolf stamp is from Stampin’ Up! nature silhouettes. 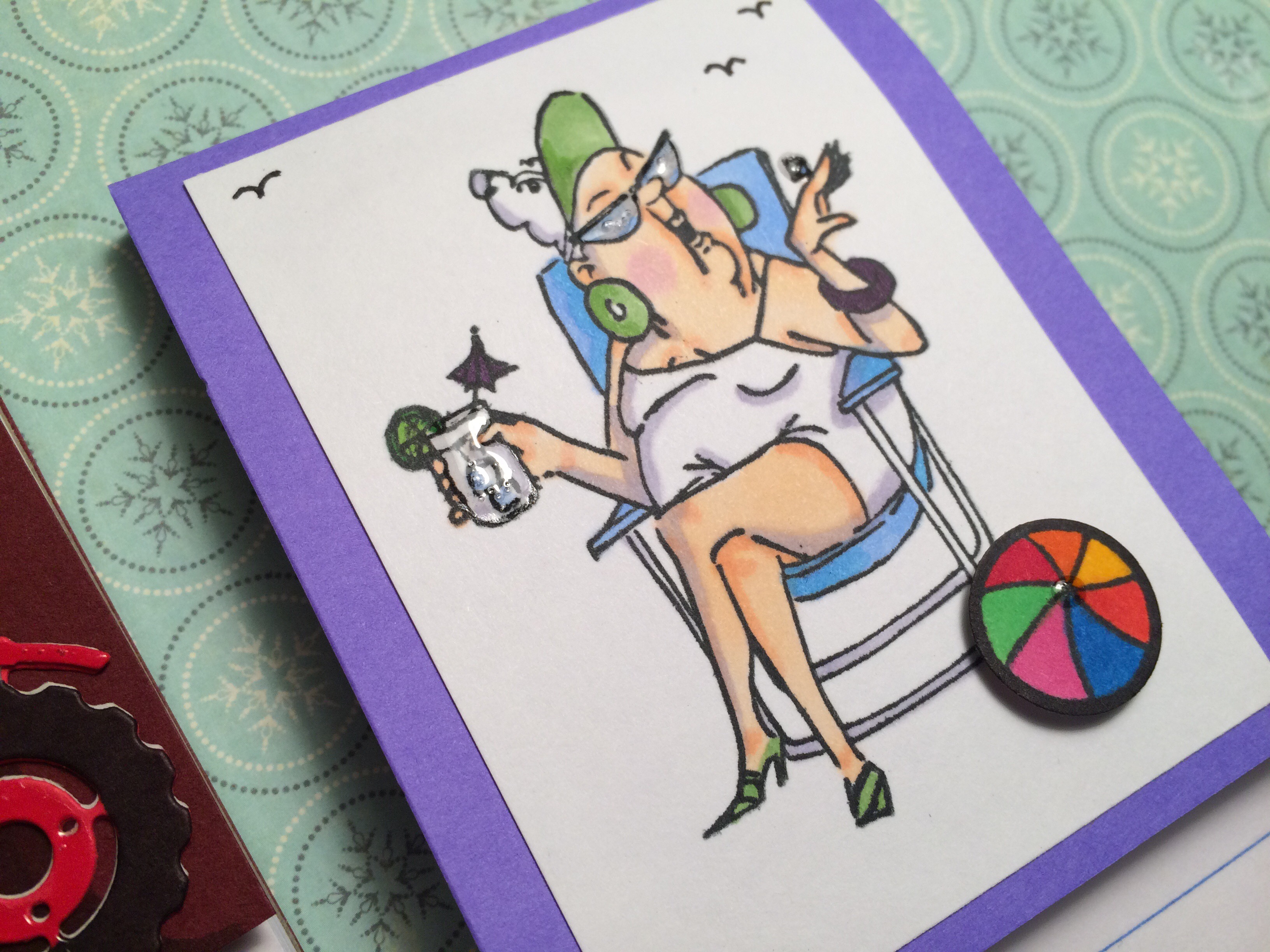 My mom loves the beach!  And she always has a visor.  This art impressions lady is perfect and I colored her with copics exactly the way she is on the stamp set.  The Beachball is from a little one dollar stamp set by studio G or Inkadinkado.  Just keep swimming…just keep swimming…. 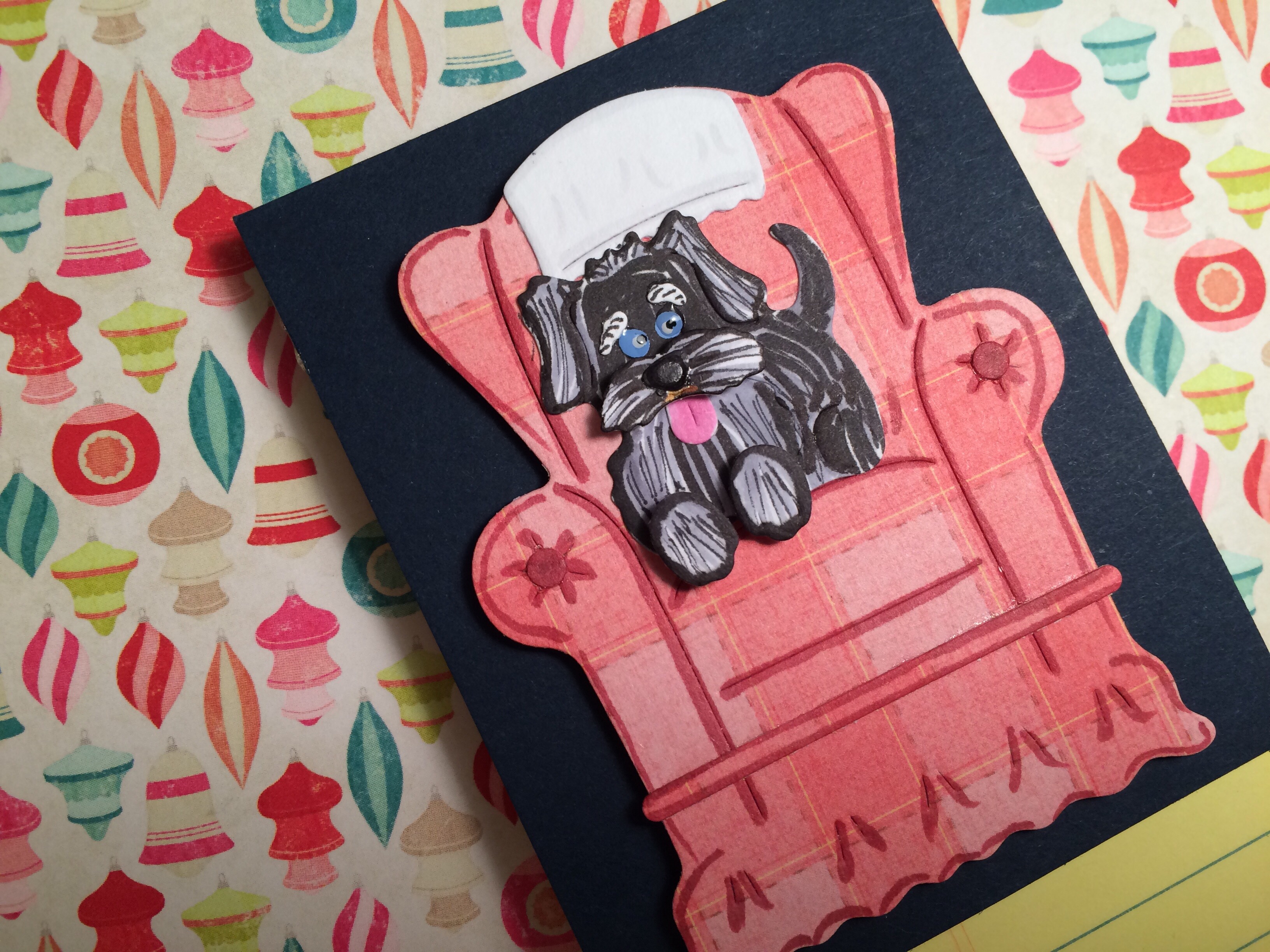 My niece loves a little dog named Alice!  Alice is a very cute long haired dog that is black and white. I should have used colored pencil instead of trying to limp along with my black Bic mark it, but just didn’t think of it sooner. Cottage cutz dog on chair die. 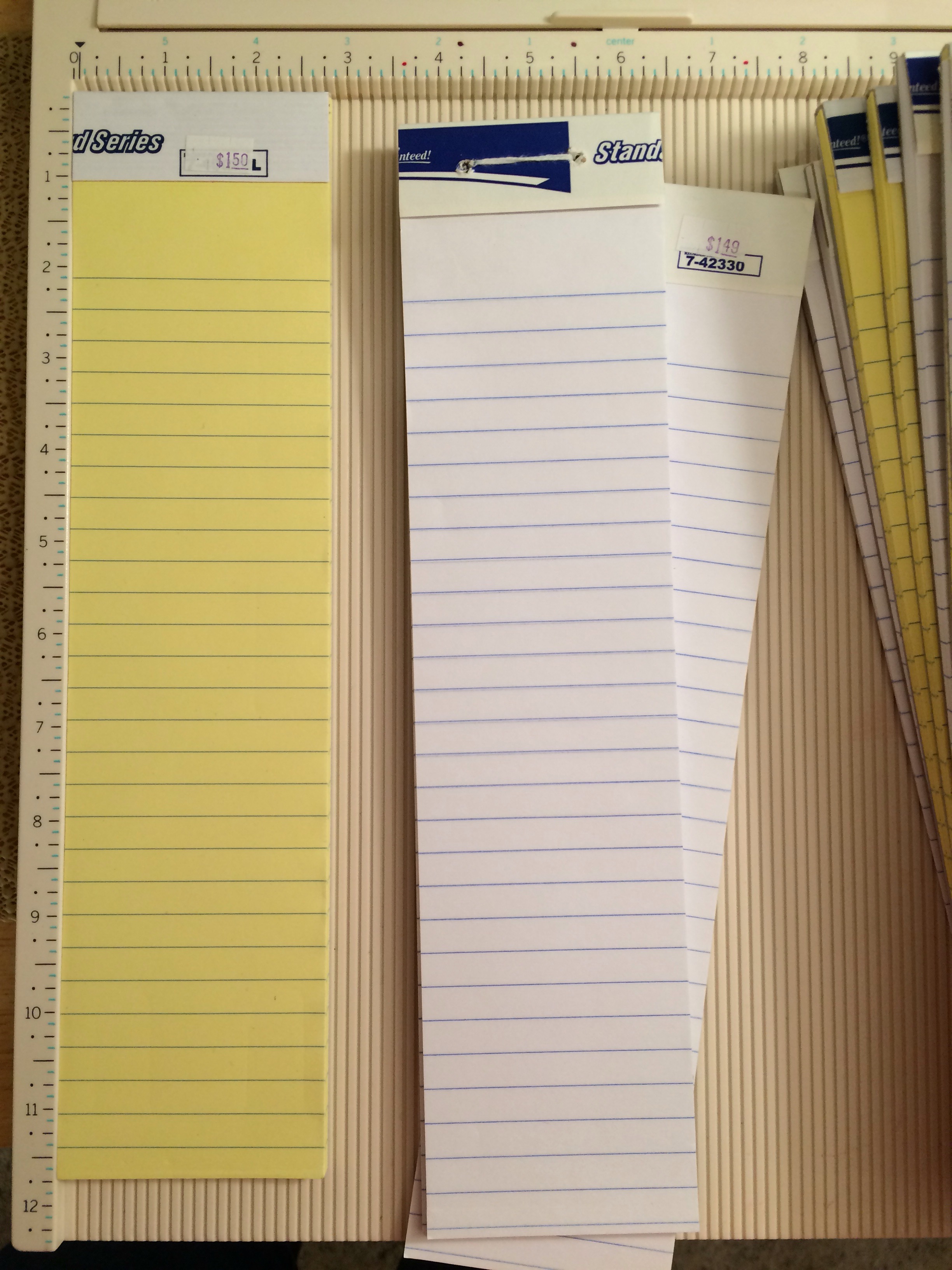 The local print shop cuts these legal pads down for me. 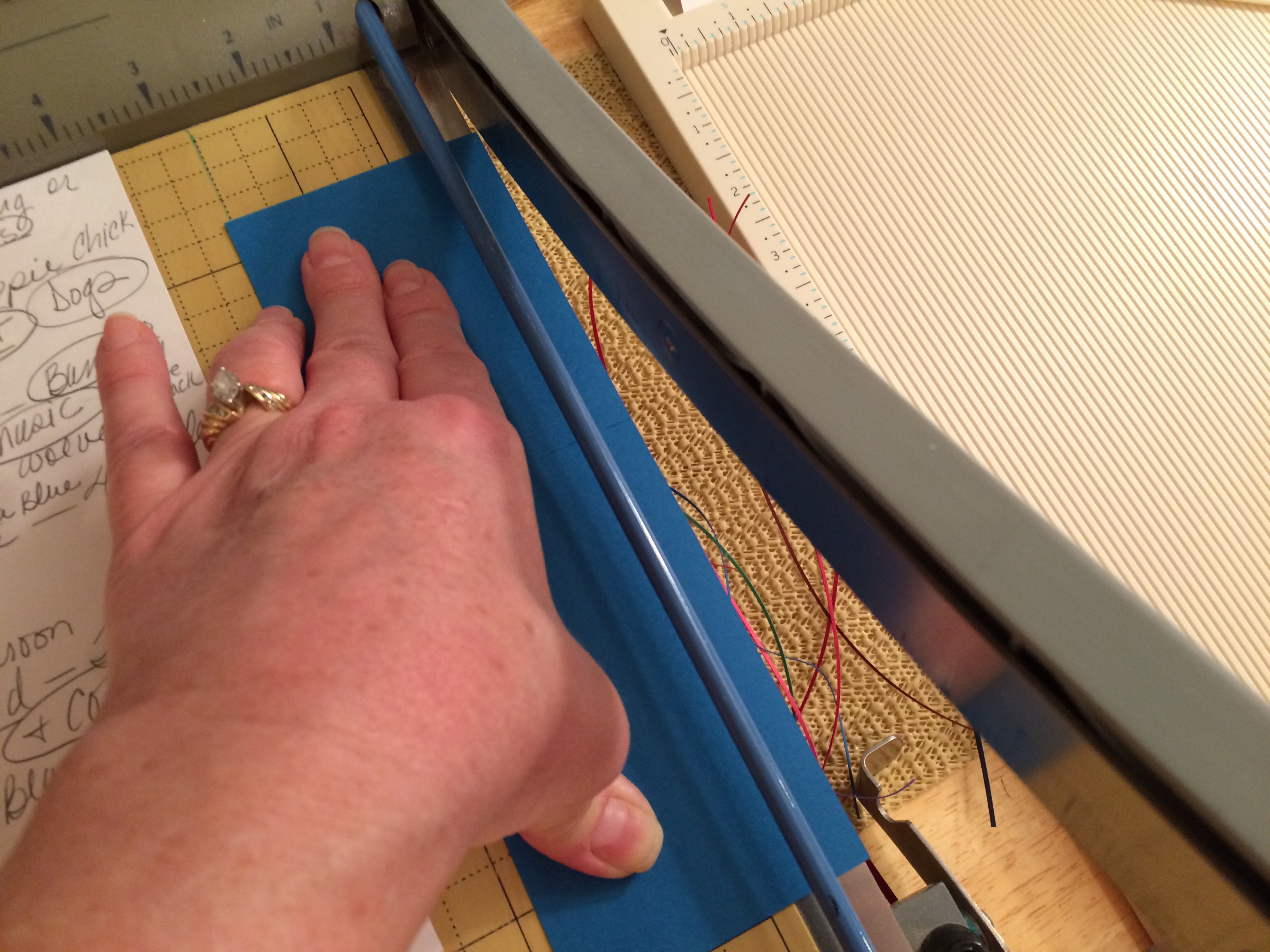 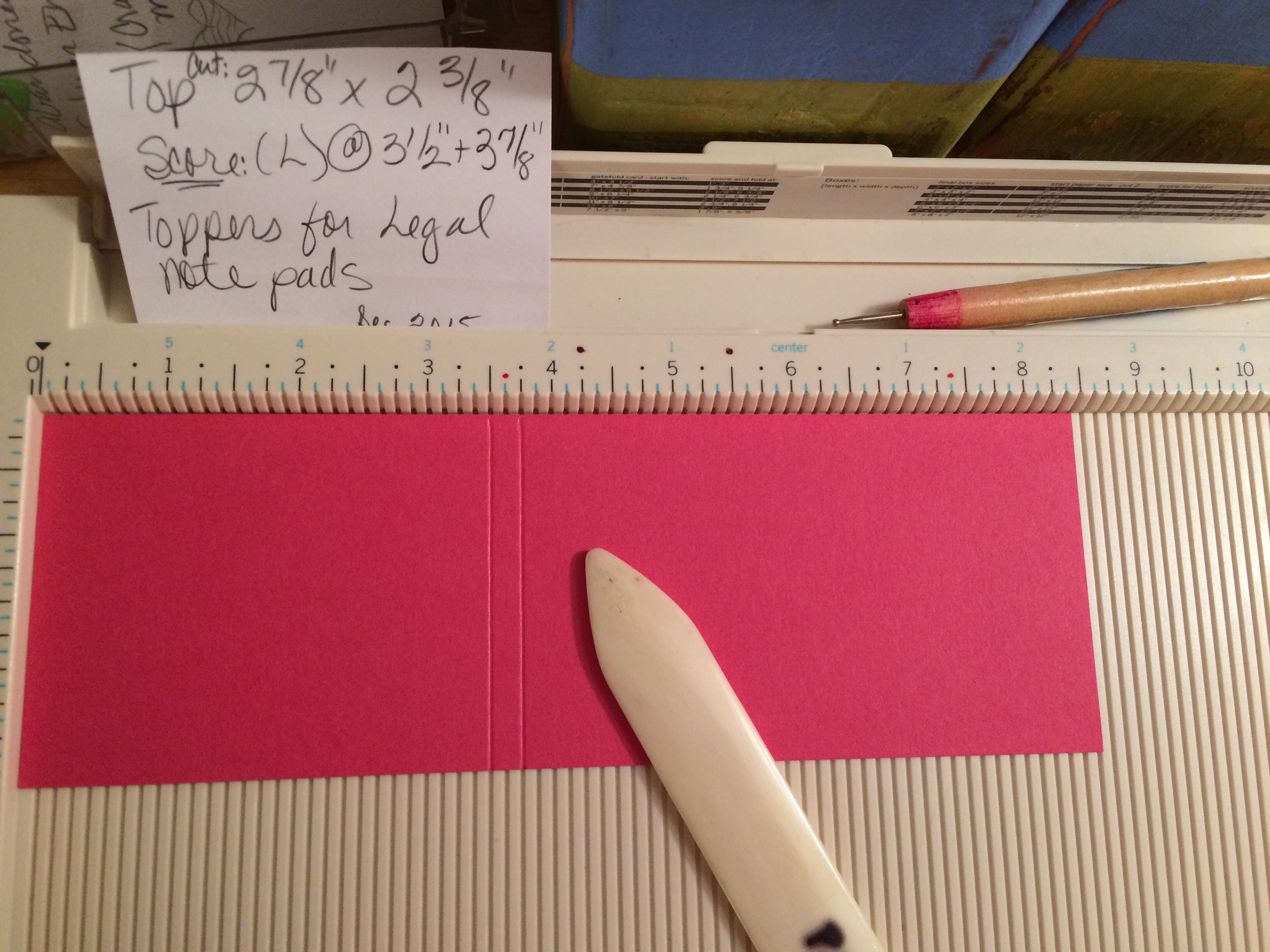 Scored (Landscape) @ 3 1/2 inches and 3 3/4 inches to cover the top of the notepads. Glossy Accent glued them down. It’s acid free so it won’t discolor the CS. 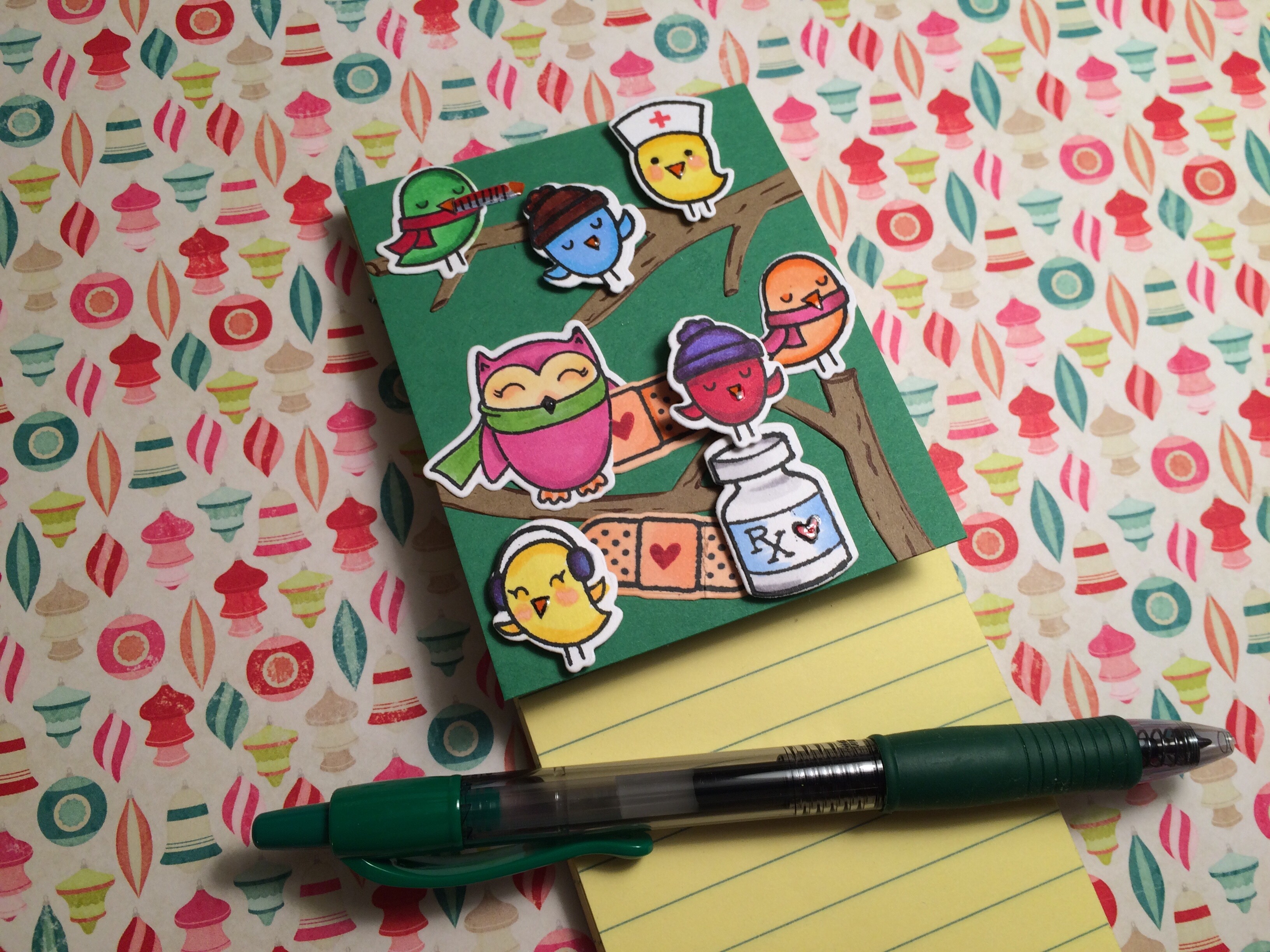 This One is my favorite!  My daughter in law works at urgent care and I had to use these little Lawn Fawn birds!  and that sweet WPlus9 owl from winter pals!  I improvised a thermometer from a spoon handle. 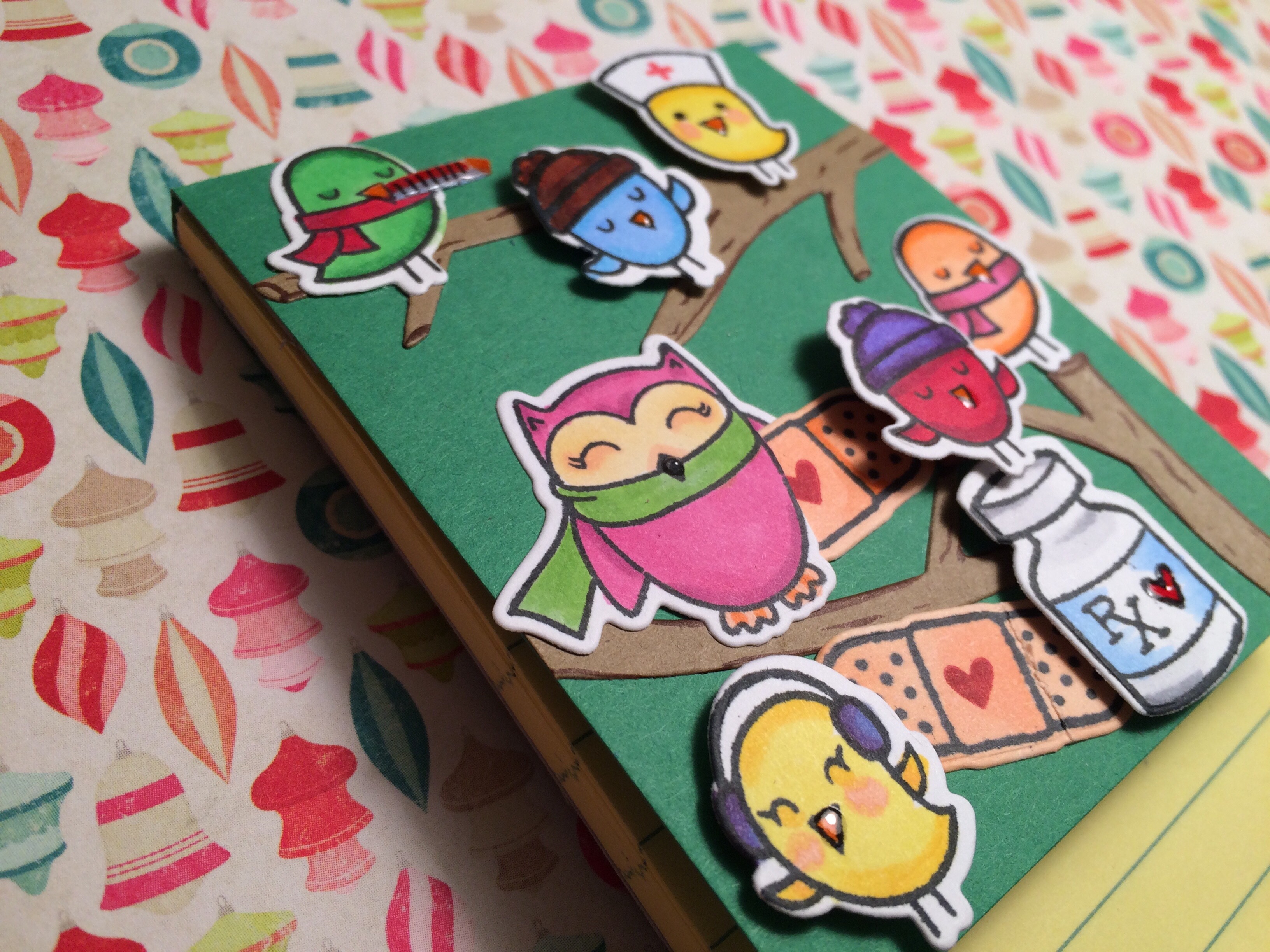 A close up I elevated some of the diecuts on fun foam and added glossy accents to the thermometer the bird beaks and the heart on the medicine bottle. Lawn Fawn get well soon and winter sparrows stamp sets. 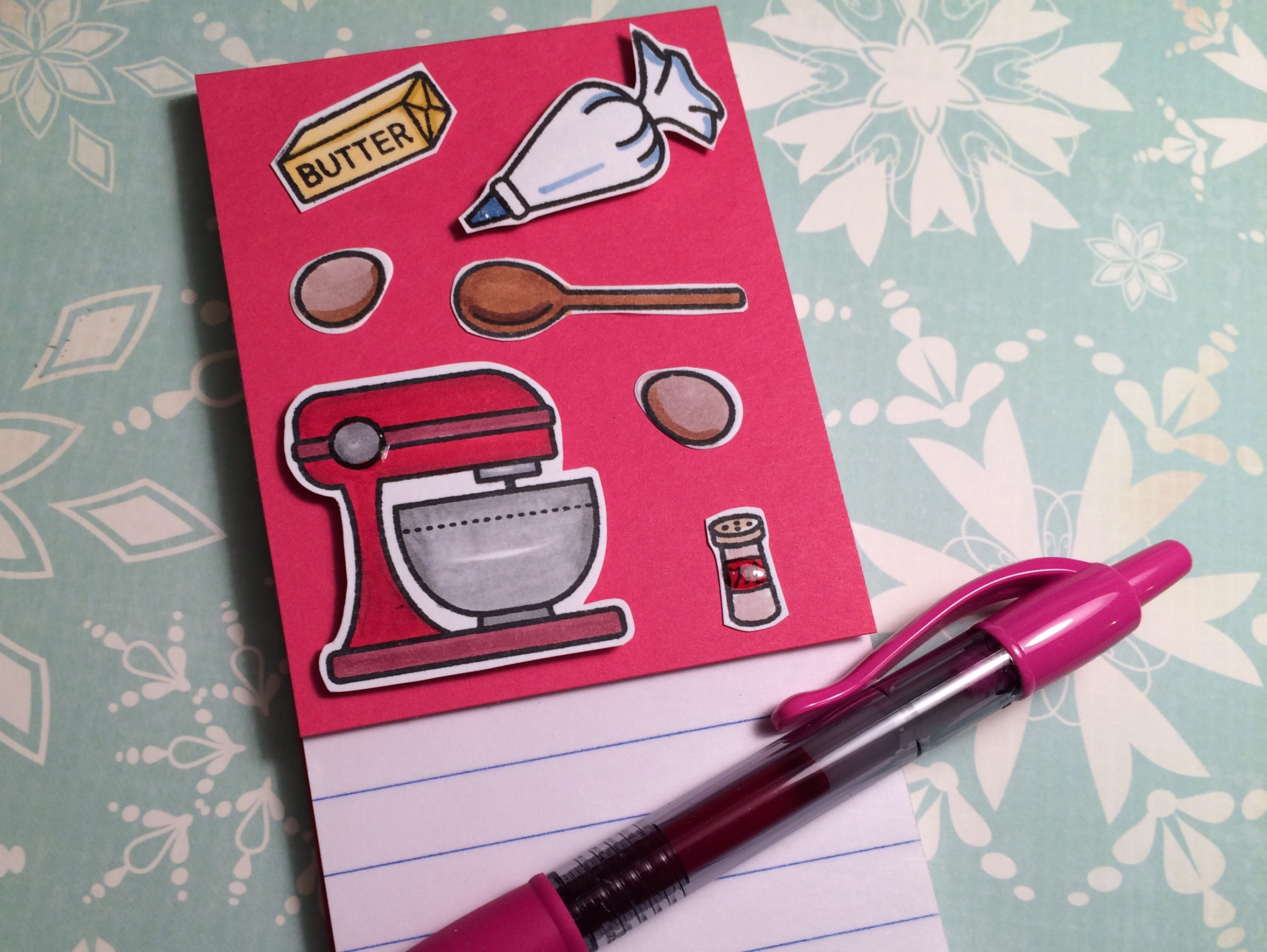 The cooking one for my daughter with lawn Fawn’s baked with love set. 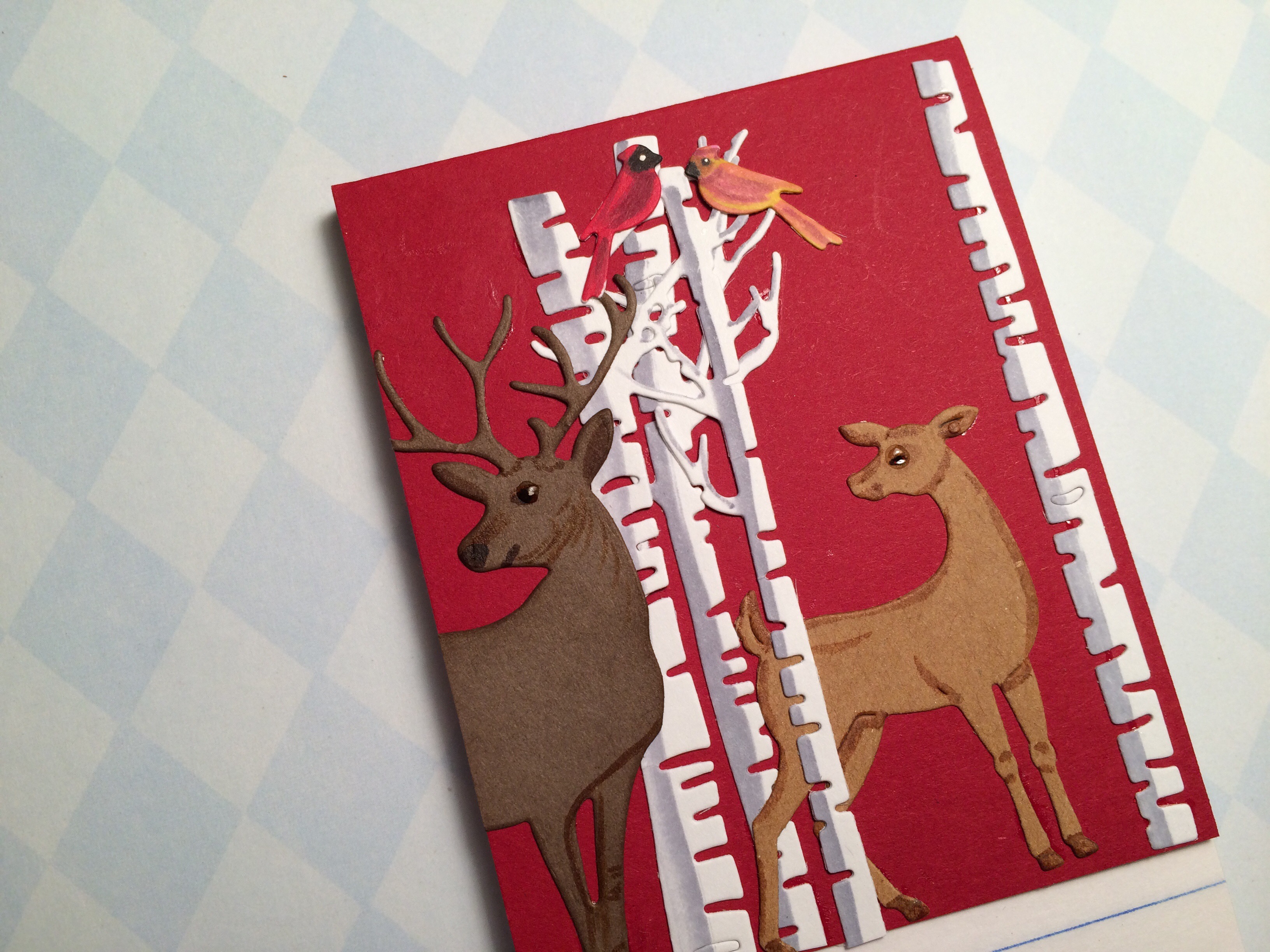 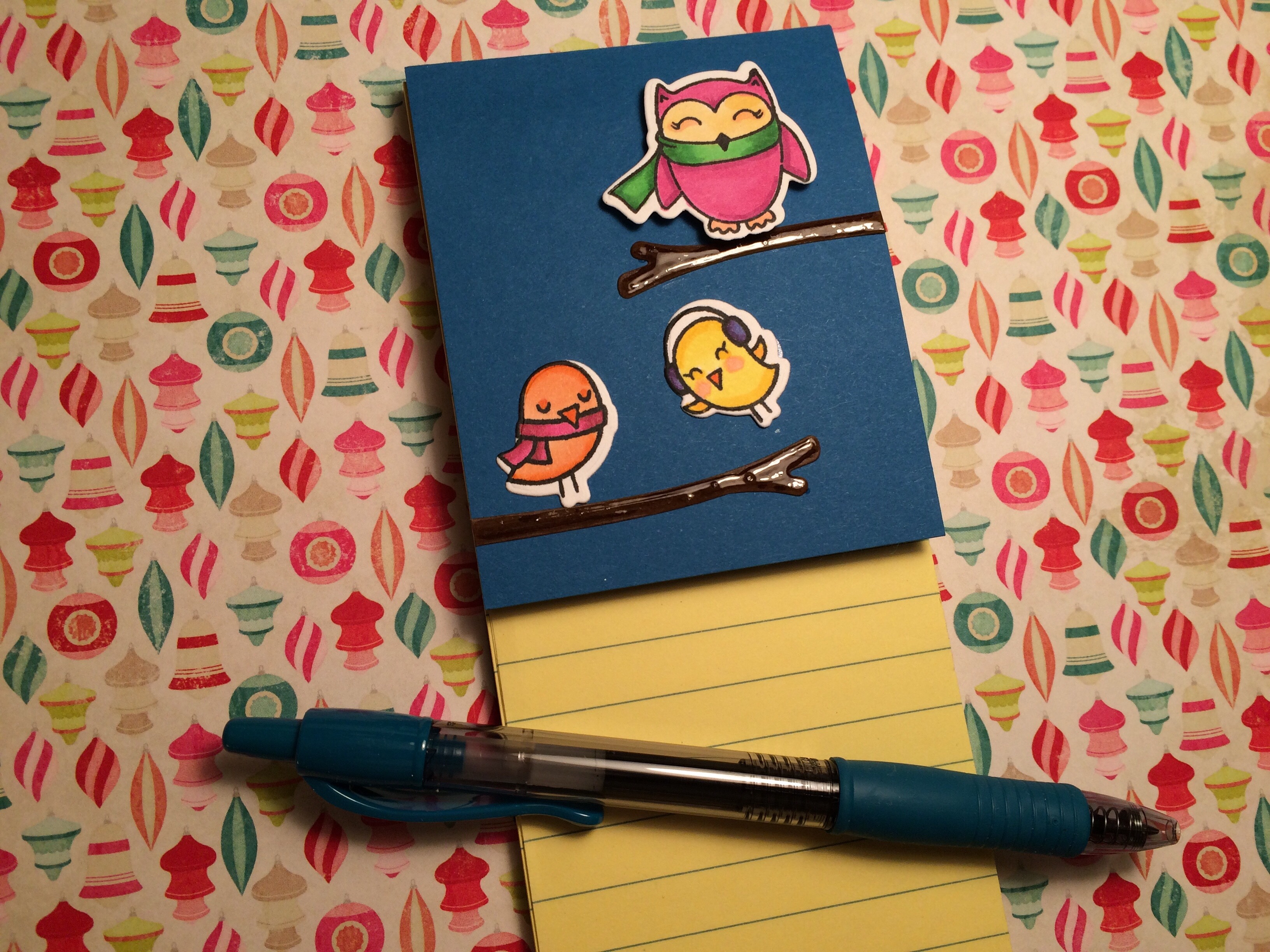 And lastly one for me I never make one for myself!!!

Sadly I failed to photograph my son in law’s note pads, one with a deer scene and one with a party crowd scene because he plays drums and guitar in a band. Maybe I can get him to snap a pic of them and I will come back and edit the post.  Because this project was inspired by Cody he requested the notepads because he’s the only person who actually uses them!!! 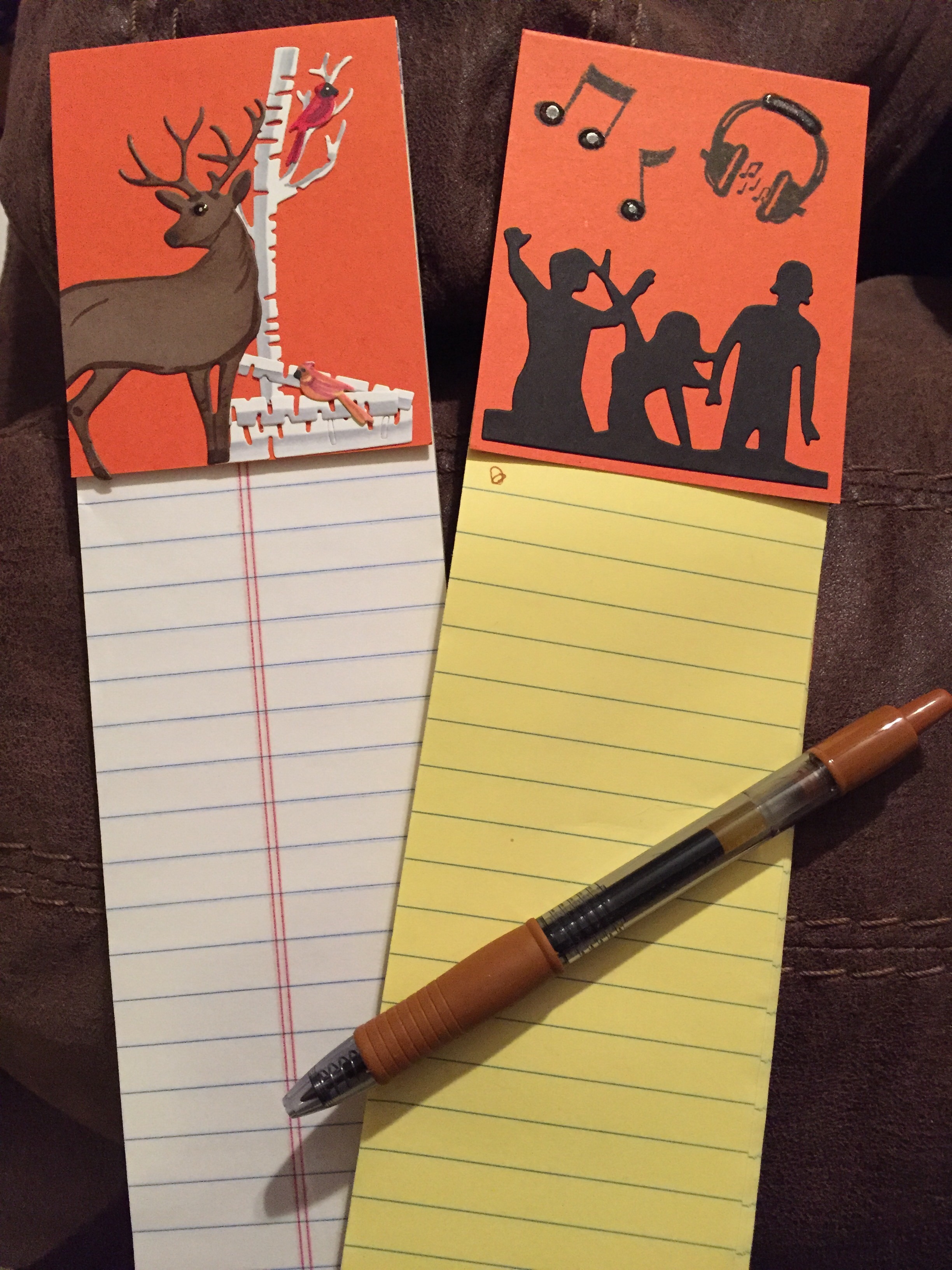 Hey Crafters!! This month’s tag is done with Water Color pencils on Canson Water color paper from Wal-mart. Stamps used: Art Impressions Live-Laugh-Love AiCS15, The Paper Studio Sophie Alphas CS010 (mom), Close to my Heart Express Postage D1262 (May-2015). Inks: Stampin’UP! Crumb Cake (for the ladies), Ranger Archival Jet Black (for mom, May & 2015). Paint brushes #3 Round (for everything except the mouth), 000 fine liner (for the lipstick), Aqua Painter to dilute the ladies on each side of Mom. My name badges also came from Wal-mart and the water color paper was cut to 3 1/4″ x 2 1/2″ to fit them. Enjoy!! 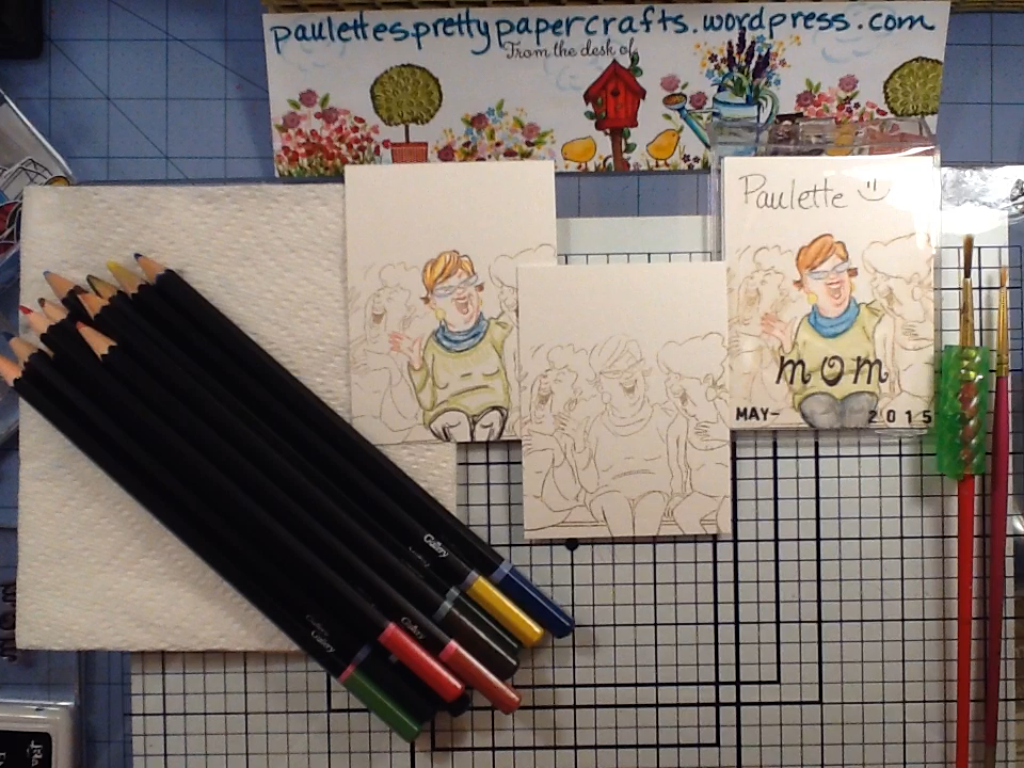 I hope you all had a great Mother’s Day! Whether, you were spoiled or you did the spoiling. We are all a mom or mother figure to someone… 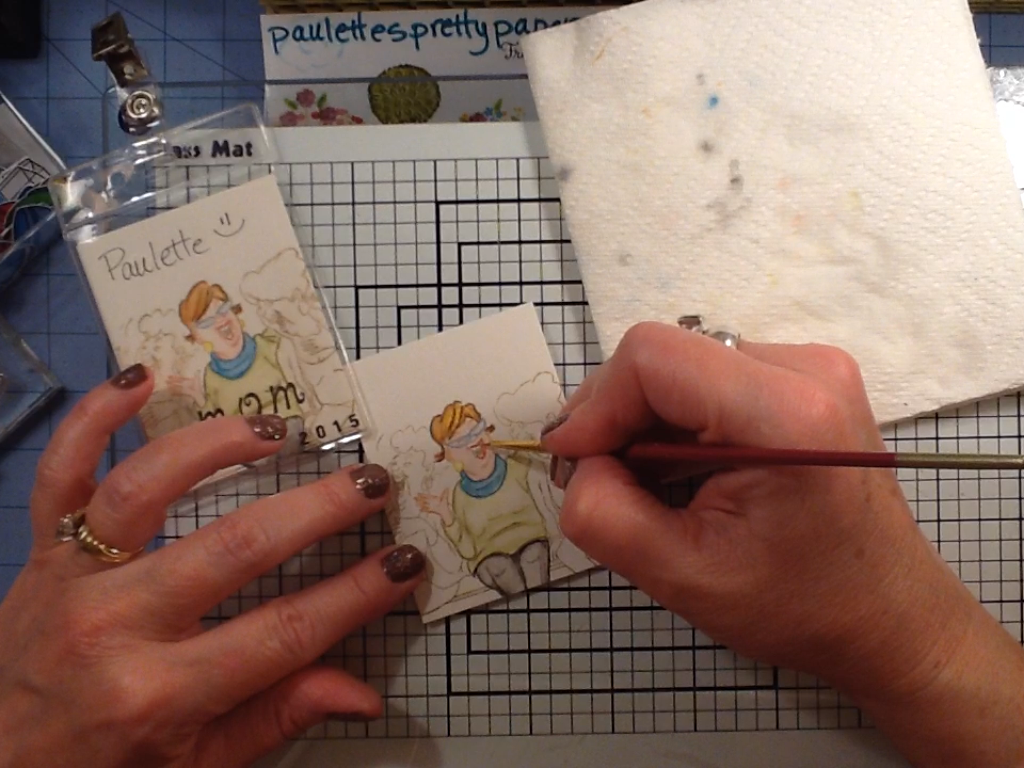 Thanks for hanging in there with me!  My dad comes from a big family.  We had 3 deaths in our family in the Spring during a 35 day stretch between February and March.  Two cousins and a favorite aunt.  Two unexpected and one long suffering.  The first cousin, Ryan, passed unexpectedly at home in front of his dad (my favorite Uncle Roy), he was very over weight and years younger than myself.  I missed that funeral due to my Nana duties, while my daughter was out of town.  Then my aunt Kayla died unexpectedly an evening after being rushed to the hospital the night before with dufficulty breathing, which I didn’t even know about.  Just so happens my favorite cousin, Lesa, had popped in to check on her when the news came that she was not going to make it and watched her pass, which was heart breaking for her, but I’m glad she and her husband were there for my Aunt, Uncle Bill and their son.  Aunt Kayla had 2 back surgeries just 3 years ago, one through the back and one through the front.  I’m wondering what they did to her.  I’d missed that funeral due to snow and ice and was somewhat relieved to not have to drive what takes a normal 3 hours to get to my parent’s.   I already knew it was going to be a stressful funeral for me.  I’ve spent a lifetime of major holidays with Aunt Kayla (46 years if I take my age and subtract the age of 5), even those in between holidays like Mother’s day and Father’s day, Memorial Day, Labor Day, etc. when they came to our house, since Bill is dad’s little brother.  Kayla stole my Uncle Bill from me when I was 5, but spent the rest of her life making up for it.  That special Aunt that gets you a specific gift on your birthdays, that is perfect for you.  Then my favorite cousins that are sisters, lost their brother, Barry (also the son of my most favorite Aunt Wilma), passed a week after Aunt Kayla’s funeral, after a long battle with a lung infection.  He is the one I made the Horse card for in the Fall.  I spent so much time at his house growing up, since I’m so close with his sisters (we girls are each 1 year apart in age).  They just lost their dad 3 years ago and this loss was too soon.  I’d already had a major melt down with Uncle Bill the evening before at Barry’s visitation because I hadn’t seen nor spoken to him since Aunt Kayla’s passing.  I couldn’t!   He’s a Vietnam vet and I’ve had a very special relationship with him and uncle Roy since I was a year old, years before Royy became my uncle.  He’s dad’s best friend  from school and cotton pickiin’ days.  Bill and Kayla also checked on everyone and kept everyone in the loop if anyone was ill.  Bill has always paid special  attention to all of us kids growing up and even our own children too.

I completely lost it at Barry’s funeral, when the pastor started talking about another cousin, Brett (brother to Ryan) and some of Barry and Brett’s childhood memories and fun, which is my childhood.   All of my cousins and I bounced back and forth between Aunt Wilma’s house and Granny’s house during the holidays.  I was very close to Brett from babies to teens.  He passed on my birthday, the year I had lumbar surgery and lived several states away, so I had no closure there.   I was that unconsolable person, the one wailing terribly.   All of the deaths and the pain they caused my favorite people, plus my own greif and or gulit, was unbearable and soul crushing regardless of my Christian faith or beliefs.

I’ve got tons to share, hauls and card making with the occasional craft tossed in there too.  I just have to edit or re-film some of my videos, which is tough without a proper editing program. LOL  I’ve got a new grandson, born just after Aunt Kayla’s passing and I’ve already started keeping him 1 day a week and have my grand daughter whose turning 3 in June, 2 days a week.  This past winter was the toughtest by far arthritically (is that even a word?).  We had to say goodbye to the sweetest little chihuahua soul ever on top of everything thing else!!  And were in such terrible shape over that, that our son went out and got us another little girl, who is the most mistreated  5 month old puppy we’ve ever seen!  Not potty trained and knew only of being hit and living in a crate full of pee.  Cleaning up accidents is about to drive me to drinking.  It’s taken her 3 weeks to learn how to be loved and accept that love.  She is a goober, who loves to sit in flower pots full of dirt and brings rocks and shrub limbs into the house, but we love her so much already.  We’ve had tons of RAIN,  which means Take 2 steps back and clean up some potty on the floor.   I need some good ole’ warm sunny days for playing outside. 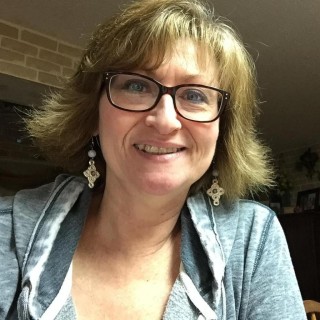